Of course, if you want to visit the Netherlands, you might decide to book a flight from Wrocław to Eindhoven, take a bus or train to Amsterdam, stay there a couple of days, and return. That way, you will probably have a lot of fun - like many, many others before you.

But, believe me, there's so much more to my country than its capital city. Did you know there's a place where the paper bins talk to you? A city where people dress up the church tower? Would you like to spend time on an island given back to nature, to see thousands of redheads in one day, or to explore two countries during the same holiday? Read on. 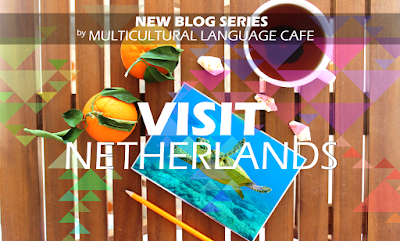 If you feel like stepping away from the beaten path ("Amsterdam - Zaanse Schans - Amsterdam"), and experiencing the area in a less touristic way, please consider spending some time in the following places.

When you visit this place, it's not hard to see why Breda became an official sister city of Wrocław. In medieval times it was a residence city of the House of Orange-Nassau (anchestors of our current royal family), and this attracted other nobles, who built residences in the city center and placed Breda at the center of political and social life in the Low Countries. Later on, the city became less important, but you can still find pretty buildings and a very nice atmosphere over there.

Also, you might want to know that "Colonel" Thomas Parker, the manager of Elvis Presley, was born and raised in this city, as well as former and current no. 1 DJs Tiësto and Hardwell.

And gingers, attention please: each first weekend of September it's "Redhead Day" in Breda! This free of charge two-day summer festival is a gathering of people with natural red hair - in 2014 the festival attracted approximately 6.000 redheads from eighty different countries. (Leonardo..?)

Charming, medieval, but small and surrounded by bigger tourist magnets such as Antwerp and Rotterdam, Bergen op Zoom might be easily overlooked. So let me assure you that I'm not only mentioning this city because I was born here.

The best time to visit this city is in summer when the Krabbenfoor (Crabs' Fair) takes place, or - if you are up for something totally weird - during Carnival, which takes place in February or March. Carnival is celebrated throughout the southern part of the country, and many people consider the celebration in their city or home town to be the best (including me), but Bergen op Zoom definitely has an unique way to celebrate it. Would you like to party wearing old clothes and curtains and a strange hat decorated with, well, everything you consider appropriate? Ever wanted to see a dressed-up church tower, that might even wink at you? Then this is your chance.

No matter when you're there: if you consider yourself a coffee, tea and/or ice cream lover human being, do not forget to make a stop at Crusio. Seriously. This ice cream parlor is open all year long and has received multiple awards. Delicious tea, delicious ice cream and - according to those who know - delicious coffee, so don't miss it.

If the title above makes you think: "Wait... Are there mountains in the Netherlands?!" - congratulations, you are a well informed person. No, we don't have mountains. The Netherlands is almost as flat as can be. Therefore, the hilly area in the very south of the country seems a bit exotic - or "mountainous" - to us.

Here you can find the highest point in mainland Netherlands, on the Vaalserberg ("berg" = mountain) at an 'astounding' 322,5 metres above sea level. If that doesn't impress you: the area is also known for its castles, ancient lanes, an incomprehensible dialect, and the historical city Maastricht - birthplace, by way of the Maastricht Treaty, of the European Union and the Euro currency.

Go there, and explore this atypical Dutch area by yourself.

All of the above places are located in the south in the Netherlands, so let's move to the very north now, before people start to think I'm a stubborn "southerner".

The Wadden Islands, also known as the Frisian Islands or Wadden Sea Islands, form an archipelago in northwestern Europe, stretching from the northwest of the Netherlands all the way through Germany and to the west of Denmark.

The islands are famous holiday destinations. Texel, being the largest island, offers the broadest range of possibilities: nature, musea, beach life, shops, discotheques... The other islands are more catered towards people who want quietness and relaxation.

Cycling is by and far the best way to get around on the islands. On Vlieland and Schiermonnikoog, cars are only allowed for regular inhabitants!

Not only the Wadden islands are known for having beautiful coastlines. Our neighbours - the Belgians and Germans - envy us because of our beaches. Of course most people go there in the summer time, when there's a chance(!) of having nice beach weather. (Do not expect Mediterranean temperatures in our moderate maritime climate.) But you can have a good breeze at the beach all year long, even during Christmas.

Nature reserves are rare in the Netherlands, small, and often not as 'wild' or 'natural' as you might expect, but not less beautiful than in countries where everything has more space.

The Veluwe, in the eastern part of the country, is a well-known tourist destination among Dutch people. The area features many different landscapes, including Europe's largest sand drifts. If you're up for something a bit less popular: in the south-west you can find De Zoom - Kalmthoutse Heide, a cross-border park close to Antwerp and my home town. A large part of the park is covered with heath, coloring purple in the period between June and September.

Planning to stay in, or close to, our biggest cities? The island Tiengemeten, just south of Rotterdam, was given back to nature in 2007, and in the Oostvaardersplassen (video below), close to Amsterdam, groups of wild Konik horses - originally from Poland - enjoy their freedom.

In a small country, everything - even nature - is nearby, so why not take some time to relax?

Whether you go to the north, the south or somewhere in between: at some point you will get hungry. Going out for lunch or dinner is expensive in the Netherlands, so you might want to buy your food at a (super)market - at least every now and then.

This is also the place to go if you want to buy typical Dutch food. Dutchmen don't buy their food at expensive tourist shops, you see? So please be clever and get your stroopwafels (syrup waffles) and kaas (cheese) at places where we buy these products as well.

Unless you are addicted to fridge magnets, I would recommend you to stay out of tourist shops at all. Try out some 'real' Dutch shops instead, such as Bruna, HEMA and Xenos, or - even better - spend some of your money at independent, unique local shops.

As a child, the Efteling was my favorite place in the Netherlands - no, in the world. This theme park has an enchanting fairy tale forest and many, many other attractions, including the first modern Madhouse in the world (Villa Volta) and a wooden racing coaster (Joris en de Draak - George and the Dragon) that is simply too much fun to incorporate. Add beautiful scenery, wonderful music, and statues of fat guys who say dankjewel - "thank you" - when you feed them with paper, and you know why I still love this park.

"Say what?!?" Yes, I put Belgium in a list with places to visit when you're in the Netherlands... Since I grew up less than four kilometers away from the border between these two countries, I'm much more familiar with northern Belgium than with the northern part of my own country. And even if you're further away from the border: it takes maximum five hours to get to Belgium by train. Both countries are small, remember? So why not exploring two countries at once? (To the Dutchies who read this: get over it.)

I can give you at least two good reasons to visit Belgium: it has picturesque, rich Gothic cities (such as Antwerp, Ghent and Bruges) and more distinct types of beer per capita than anywhere else in the world. But even if there wouldn't be pretty churches and high-quality beer in Belgium, I would recommend you to go there, for just one sole reason: the cuisine. Some of the national dishes are so damn delicious, that I believe my taste buds are Belgian. (I have one Belgian great-grandparent, you know...) And some bonus points: going out for dinner seems to be less expensive - or worthier of the price - than in my own country.


---
Disclaimer: These were my personal recommendations, based on years and years of living in the country (in two different places), what I've seen so far, and what I considered to be worth mentioning. Of course other Dutch people might disagree with me, and so may you after exploring the place by yourself.
---

Feel free to comment, ask questions, add recommendations, or to thank me below!